Popularly known as International Workers’ Day – 1st of May is something completely different in Finland. “Vappu” is one of the biggest carnival-like celebration/festival celebrated in the streets of towns and cities.

For the past 8 odd months I have spent in Finland, I haven’t seen or experienced any festival that is celebrated with such zest in the streets among friends and family. Vappu basically marks the beginning of spring with loads of fun and joy. From students to elders, everyone takes part in this joyous celebration. 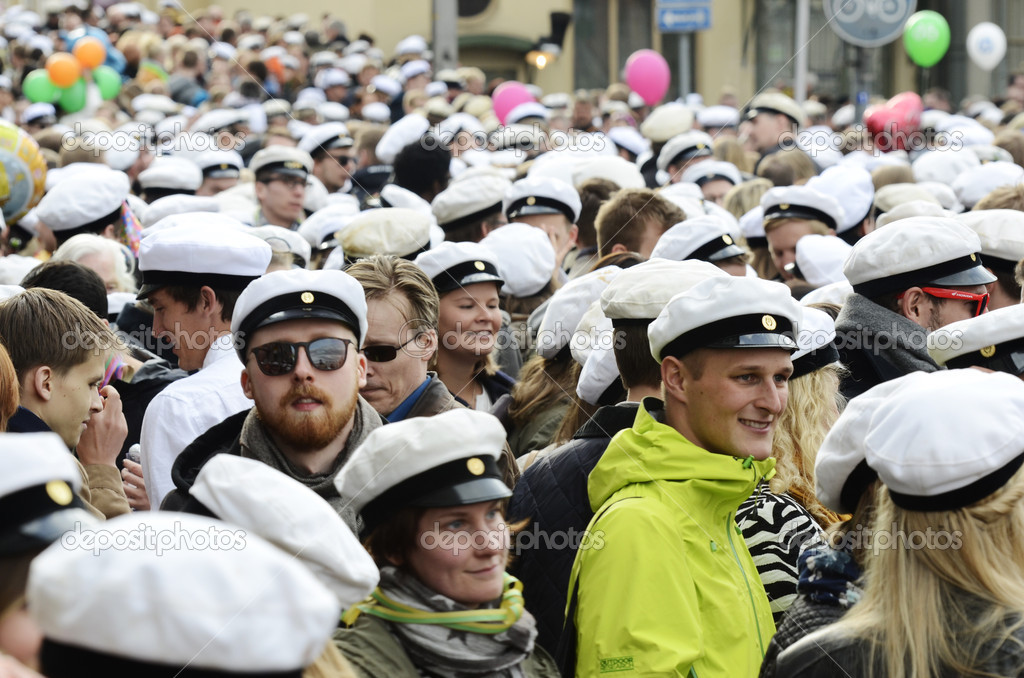 While graduating from a Finnish high school, the student is given a white hat. Every individual irrespective of which year they graduated or how old they are, wear the hat on this day.

The fun and frolic usually begins a day or two before 1st of May, especially among the students.

Even though the celebration is about welcoming the spring, there is a high possibility of snow, rain, sleet or simply “cold” or winter-like weather. But this doesn’t stop the Finns from getting on the streets and parks to chill and have a picnic with some traditional Sima

(the Vappu drink), Munkki (the Finnish Doughnuts) and Tippaleipä (Funnel cake). Check out the following link for the recipes –

WHAT TO EAT AND DRINK IN VAPPU (AND RECIPES)

Not to forget one more important part of this celebration. Alcohol. With all the happiness around, who wouldn’t like to boost up the energy with some alcohol?

Various colorful balloons,  varied outfits, sprays, party-poppers and much more are seen all around the place. If you ever get to experience “Vappu” make sure you do it the Finnish way!

*Lapland is the largest and northernmost region in Finland. Lapland is the home of about 3.4% of Finland’s population, and is by far the least densely populated area in the country.

The next day at 10:51 EET we arrived at Rovaniemi (the meet-up place). We were greeted by the wonderful AFS volunteers and leaders. 101 exchange students were later divided into two groups, Bus 1 and Bus 2.

For the next few days that we spent in Lapland AFS Finland had organised a number of activities. Few of the highlights of the trip were –

The Amethyst Mine was one of its kind. Even today no machines are used for mining, instead they are done by small hand tools. The ride in the Reindeer Farm was an awesome experience. To our surprise, we were all given an Reindeer Driving License! How awesome is that?! My first time skiing experience was something I will forever remember. It wasn’t as tough as it looked though. Especially because of the trainers that were there to help and guide us. The Arctic Circle! The home of the real Santa Claus! Our last and final stop. Which was also one of the most exciting!

There were a few other activities such as ice-fishing, snow shoe hiking and treasure hunt etc, which were of equal fun!

On February 5th 2018, it was time to return. We knew there were huge probabilities of most of us not meeting each other again. We still said “see you soon” to each other with the little hope we had. Maybe. We were satisfied. We knew we made memories.

All this wouldn’t have been possible without the help of AFS, the volunteers and leaders that accompanied us, host families, parents and our very own friends that we made during this trip.

Instead of writing my own experience I thought it would be great to share the experience of two other people, of an event that we were all a part of.

P.S. It was my first time dancing in front of an huge group of audience. Thanks to Ilomantsin Lukio and AFS for making this possible.

The old days (wanhojentanssit) dance was performed on Friday the 17th in most high schools across Finland. It is the celebration of the second-year students becoming the senior most of the school. It is often celebrated the day after the third-year students stop attending school and start preparing for the final (matriculation) exams. It was perhaps one of the most happening and cheerful event this year for the second graders. Essi Kautto,student of Ilomantsin Lukio and Marjaana Sivonen, teacher in Ilomantsin Lukio and a proud mother of one of the dancers/student have a lot to share about their experience of the ‘‘Vanhojen Päivä’’.

Even after performing 3-4 times throughout the day, the dancers were at their presentable best during the final show.

Both Marjaana and Essi agreed that Riikka Punnonen and Kimmo Lindeman, the dance teachers, have done an absolutely spectacular job. “It’s getting better as each year passes and the dances are intensifying with the best dance for the end,” Marjaana said.

The final show was scheduled at 6 PM. A lot of people had come to witness the event, many from other nearby villages too.

The dancers have been practising for about 5 odd months while Marjaana too has spent about 2-3 months behind the scenes, organising her daughters dress.

“I was nervous about the dress as I altered a little part of it by myself but I’m glad it worked out in the end,” said Marjaana.

A total of 9 dances were performed, the Fireman’s dance, surprisingly was one of the most liked dance. “Our own Contemporary dance and the Fireman’s dance were my favourites,” said Essi. While Marjaana said, “The Beauty and the Beast dance had an emotional touch to me.”

“I just want to go back to the day and dance again” said Essi, as it was only once in a lifetime celebration. And as of Marjaana, it was the only day she would witness her daughter doing the wanhojentanssit and hence was a special day to her.

As all good things come to an end, so did this joyful celebration. And so came an end to yet another day, a day well spent.

What Animal Am I As A Writer

I f I had to be an animal as a writer, I’d choose the EAGLE. As a writer one of the most important points to keep in mind is to inspire/make a difference in the readers’ life.

The eagle also is really focused on its target. Nothing can distract it from reaching success. And the eagles love to face the storm. This ability to be focused is important for a writer as there a lot of hurdles in being a writer, many problems may arise but his ability to focus with patience is what defines his success.

The eagle also plucks out every feather from its body once it’s old. The eagle goes through this painful process and stays far off until new feathers are grown. It is one of the key points for a writer to understand if his ideas are old or are not interesting. He has to go through a self-check and come back with new and unique ideas. It is important to shed off old ideas that burden us or are of no value anymore.

To conclude, I believe it’s important to leave our comfort zone to achieve success. One has to be ready to go through the storm to rise out with flying colors.

The first article I’m posting here is a #repost of something I had written during the first month here in Finland. Reading this now makes me feel motivated and feel the changes that has occurred in me all this while.

The adventure began on 18th August, 2017 and I can confidently say that I am on the right path to success and achievement. The members in my host family are some of the coolest people I’ve met. “Fun” is what describes them. They have been of constant support to me in settling down. And made me feel like part of the family. My host brothers are really fun to be around with and are ever ready to play or to have fun together!

Communicating in a new language is challenging. I am trying my best to work on my Finnish language skills and I believe I can do it!

Getting used to the new culture isn’t as tough as I thought it would be. There are a few difficulties but that’s what will help me overcome the hurdles and challenge my capabilities to make this year worthy and make me an independent citizen of the world. One of the best, experience is the Finnish Sauna. It’s HEAVEN! With the outside temperature as low as 1 – 10 degrees Celsius, relaxing inside a room which is heated up to 80- 90 degrees Celsius is heavenly.

The school system is really new for me. All the lessons being taught in Finnish, again requires me to learn Finnish as soon as possible. The school authorities have been of constant support and are doing their best to fulfill one of the main aims of the exchange program – Education.

Coming from an urban city, and living here in the country side is completely different. But, its way more peaceful, beautiful, and gives you a mesmerizing feeling as you experience the beauty this land has to offer. Not to forget the weather, nothing more than 15 degrees Celsius.

I’m eager to experience more new things along the journey. Honestly, its sometimes awkward because people are just too nice to you. I’m thankful to the host family, host school (Ilomantsin Lukio), AFS, my parents and my school (The Assam Valley School)for helping me in every way possible to start this adventure successfully.